“My paintings help give a voice to women”
Malak Matar

Malak Matar was born in 1999 in the Gaza Strip.  She started painting in 2014 as a means of escape from the aggression and violence she and her family experienced daily while living in Gaza Strip. Her first solo exhibition, which she held just one year later at the age of fifteen, allowed her to make connections with international journalists and gain recognition for her artwork on social media. After achieving the distinction of the best high school student in the Gaza Strip (and second-best in all of Palestine), Malak Matar left Gaza in 2017 to study political science in Turkey.
In March 2020 she was invited to Freiburg for her first solo exhibition in Germany: Malak Matar – The Eyes of Women. The project was a cooperation between AMICA, the Volkshochschule Freiburg and the Stelle zur Gleichberechtigun der Frau, Stadt Freiburg. In her interview with AMICA, Malak Matar describes her experiences growing up as a young girl in Gaza, her artwork, and her thoughts on feminism.

AMICA: Almost all your paintings represent women. In one interview you said that you try to paint men, but that every time you do, they turn into women (UNRWA 2020). Where does your inclination to paint women come from?

Malak Matar: As I grew up, I saw that my classmates were just followers—I never met a girl who had a strong personality, who would say, “I can choose what I want to do.” I saw that women were viewed as weaker than men, and that it’s a very masculine society. In one way or another, it’s like that everywhere.

In high school, one of my classmates was forced to get married. She was only seventeen, and I felt that it was unfair. We had this choice to go on a trip to the West Bank, and I can never forget this: I asked my classmate, who was at the top of the class, “Why don’t you apply to go on the trip?” And she said, “I’m a girl.” And I said, “What do you mean, you’re a girl? You can still go.” She said, “I can’t travel alone. My father won’t allow me.”

Women in Gaza Strip still get killed in honor killings; hearing this made me really upset, although I was young and had never heard of feminism or women’s rights or anything like that. I just had this sense of fighting. I have a really big passion to speak about women and to fight for them. I hate for women to be weak; I think all women should be strong and should speak up for what we want.

AMICA: How do your pictures help you to tell this story?

Malak Matar: People say, “Why only women?” I just tell them, I was born this way: I’m a woman myself, I have my own stories and thoughts, and I believe in the struggle that women have gone through, from Palestinian men but also from the conflict. I feel myself speaking more for the rights of women because I’m a woman myself, and because I was really influenced by my mom and by the girls around me. My paintings help give a voice to women, I hope. 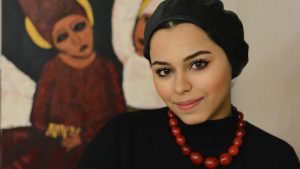 Malak Matar started painting in 2014 while living in Gaza Strip 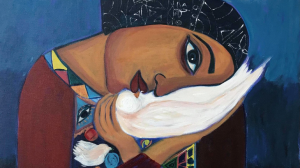 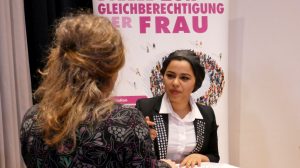 Malak Matar signing the poster of the exhibtion in Freiburg.

AMICA: What is the experience for women in Gaza? What does it mean for women to live in this conflict zone?

Malak Matar: It’s really difficult in a social and economic way. I would say women are, in many cases, playing the role of the man and the woman, because men now are killed and imprisoned more often. A relative of mine, her husband was killed in the war, and she has five children—so I can see how much she’s struggling, and I see that she has to play the role of man and woman at the same time.

Women in Gaza Strip are very strong, but the traditions and customs are still conservative in the way that they can’t be active politically or be a big voice in their community. But I heard that the number of women getting an education in Gaza Strip is bigger than the number of men getting an education. Even if a woman might not be able to work, we have this kind of thinking that she could teach her kids, which gives me hope, because for me education is the highest priority.

Even if a woman doesn’t work—which is a pity, because you need to work and earn money—if she is able to teach her kids, she is changing the world. If you educate people to accept others who are different, this is how society is improved.

AMICA: Are there people or other artists who inspire you?

Malak Matar: My grandfather used to inspire me because he was very intellectual. He was a very educated and knowledgeable person. He believed in education more than anything, so he always said that it was important not only to get an education but also to be distinguished and excellent in whatever you do. My uncle is a professional artist and had a big influence on me because he taught me a lot about art. He’s a painter and he used to teach in an art college in Gaza. Of course, my mom, my family, my sister…everyone who I know deeply and connect with inspires me in some way. I believe that even the hard times that I had have had an influence on my mind and on the way I think. I find inspiration in everything I see, not necessarily human beings.

AMICA: When did you start to realize you were a feminist?

Malak Matar: When I learned that the belief in the equality between men and women is what makes you a feminist, then I realized, hey, I’m a feminist too!

AMICA: What does it mean to you to be a feminist?

Malak Matar: To be a feminist is not to hate men; it is to believe that men and women don’t have to compete, but that they complement each other. This harmony can exist between two genders when there is equality and recognition of how each of them has their own roles and abilities without degrading the role of anyone.

AMICA: What do you wish for yourself and the women you know and paint?